Ran with a 4-person team in The Bonk Hard Chill 12-hour adventure race down in Lake of the Ozarks State Park this weekend. Years past it was cold enough to freeze the water in your CamelBak, but this year it was warm enough to run in shorts.

One section of the race we had to paddle across the lake with our bikes in the canoe. Through some bizarre circumstance of physics my bike melded with Al's during the paddle and we had to spend at least 20 minutes trying to unhook them (photo below). 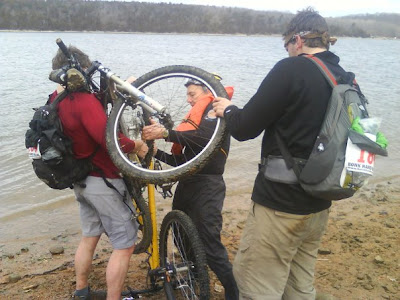 We ran fairly well, but missed a checkpoint deadline near the end of the day and suffered a severe penalty which knocked us to near the bottom of the pack. I did win a tube of Zanfel at the pre-race raffle though!

With the exception of a few beautiful bruises, Adam and Lisa, the pillars of Sisu Adventure Racing, were there running strong as usual! At least they weren't called upon to save anyone during the race this time.

Thanks to Bonk Hard Racing for putting on another great event.
Posted by Aaron Fanetti at 7:23 AM