On Sunday I teamed up with Beth Sanborn to compete in the coed division of the Conquer Castlewood Adventure Race in Ballwin, MO. We took home first place in the coed division with a combined time of 2:11:17 - barely edging out the second place team of Holtman and Hagan by only 16 seconds! 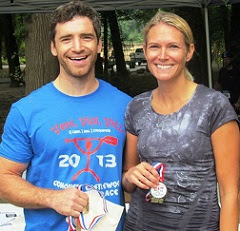 Posted by Aaron Fanetti at 2:58 PM

Language matters. This is true whether you’re crafting a clause in a contract or changing the culture of an entire organization. In fact, with a move from “customer” to “client”, a single word helped transform IBM from a product provider into a professional services company. This is because the language of an organization plays a critical role in shaping the thoughts and behavior of its people. For IBM, the word “customer” emphasized transactions and making sales whereas “client” emphasized service and building relationships.

If language plays such an important role in forming the culture of a company, then leaders should find the “Fail Fast” mantra a little unnerving. It’s an idea spawned in Silicon Valley that has gained significant traction in mainstream corporate circles. Today, leaders from start-ups to 100-year-old companies are rallying their teams under the “Fail Fast” banner. Even the venerable HBR dedicated an entire issue to the F-word.

The idea behind “Fail Fast” is simple and smart. Don’t spend a lot of money, time and effort locked in a room developing the perfect product only to unveil it to the world and discover no one cares. If an idea is going to fail, then let it fail as quickly as possible so resources can be redirected to something more likely to succeed. This is the mindset that underpins the lean and agile movements. It's adaptability, not adherence to a specific plan, that is the key to engaging in a poorly-understood or a rapidly-changing market.

Great idea, but “Fail Fast” is a lousy brand with some potentially dire consequences. Yes, failure happens and one should try to learn from it. However, the words “Fail Fast” imply that failure is an acceptable outcome. Even worse, it suggests to the less ambitious that a strategy or a plan isn’t needed at all. Just throw things against the wall and see what sticks. Failed attempts can become nothing more than poor attempts.

Failure shouldn’t be a corporate value – no matter what rate it is happening at. So if failure is not what you are looking for from your organization, then why promote it? At core, the fail fast movement is attempting to provide an efficient method to deal with uncertainty. But it’s not the failure that’s important. It’s feedback – fast feedback.

“Fast Feedback” is the mantra that should drive meetings, process design and new product development. By focusing on feedback rather than failure, leaders avoid inadvertently instituting an intellectually lazy, fail-and-bail mindset. Instead of implicitly excusing failure, when leaders invoke “Fast Feedback” they acknowledge uncertainty, communicate a need to deal with it quickly and encourage a method for doing so. “Fast Feedback” directly emphasizes the right behaviors and requires no special interpretation or background knowledge to understand.

In a “Fast Feedback” culture, conversations don’t stop with the decision of what to try, but rather push further to a discussion of how to learn from what was done and how to do so quickly. As well, organizations focused on “Fast Feedback” ultimately become more data-driven. As teams strive to collect and act on feedback faster, systems and dashboards fueled by numbers naturally begin to steer the conversation and correct behavior.

In a “Fast Feedback” culture, conversations don’t stop with the decision of what to try, but rather push further to a discussion of how to learn from what was done and how to do so quickly.

While the test-and-learn ideas underlying the “Fail Fast” mantra are valuable, leaders would be wise to consider the consequences of building a culture using a language of failure. Instead, using “Fast Feedback” as the rallying cry communicates the core ideas more directly and goes further to building an organizational mindset that confronts uncertainty more thoughtfully and effectively.

References:
Posted by Aaron Fanetti at 11:31 AM No comments: